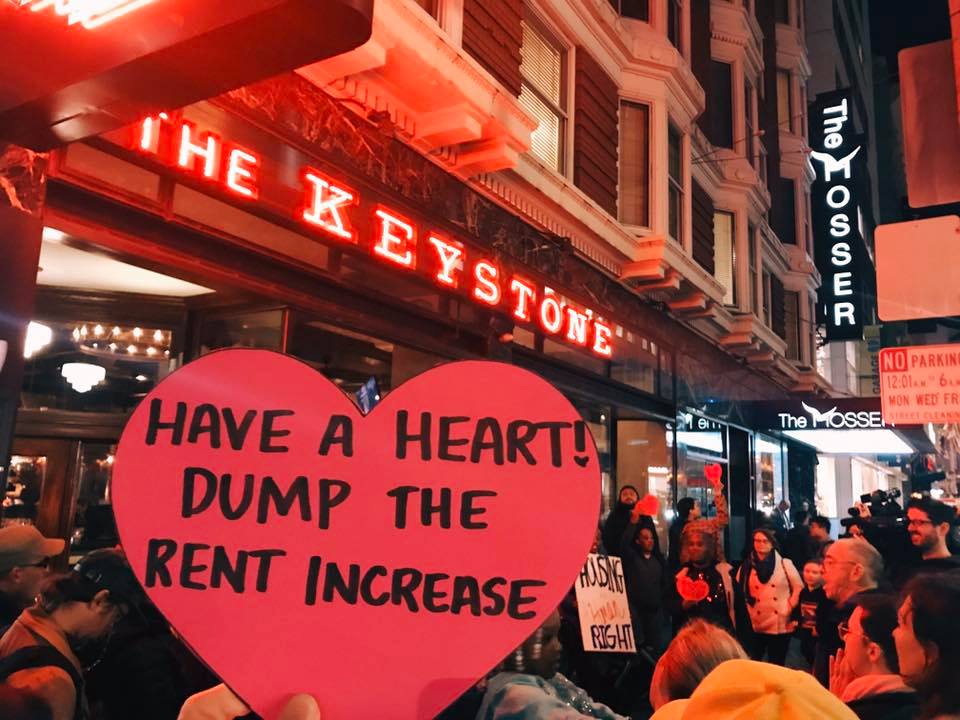 Roughly 60 protesters marched into The Keystone on Fourth Street near Market in downtown San Francisco on Friday. The upscale tavern is in a property owned by Mosser Capital, which also has many other buildings throughout the Bay Area. According to the protesters, corporate greed may force them to move out of their homes. Many in the group live in a property owned by Mosser.

“Really we know what’s going on. Long-term tenants are being pushed out,” said Sabeena Shah, who has lived in her apartment in Oakland for about 10 years. Shah says that, over the past two years, her rent has gone up nearly 20 percent.

“This is a trend I’ve noticed for many teachers I know. They’ve had to take second jobs to be able to afford to stay here.”

The tenants say the rent increases are coming in several forms, including capital improvement petitions.

Angela Shannon said, “This billion-dollar company comes in and tries to pass off costs of $1,300 for a chandelier in the lobby that no one asked for. It’s ridiculous!”

At this rate, the tenants fear they are just one more increase away from being pushed onto the streets. They’re hoping that, by raising their voices and bringing awareness to this issue, corporate landlords like Mosser Capital will stop passing through inessential expenses to tenants.

“Some of the improvements should be paid by the landlord and we have critical health and safety issues that are not being attended to,” Shah said.

KPIX spoke with the general manager of the Keystone but he declined comment. KPIX also contacted Mosser Capital on Friday evening but have not heard back.