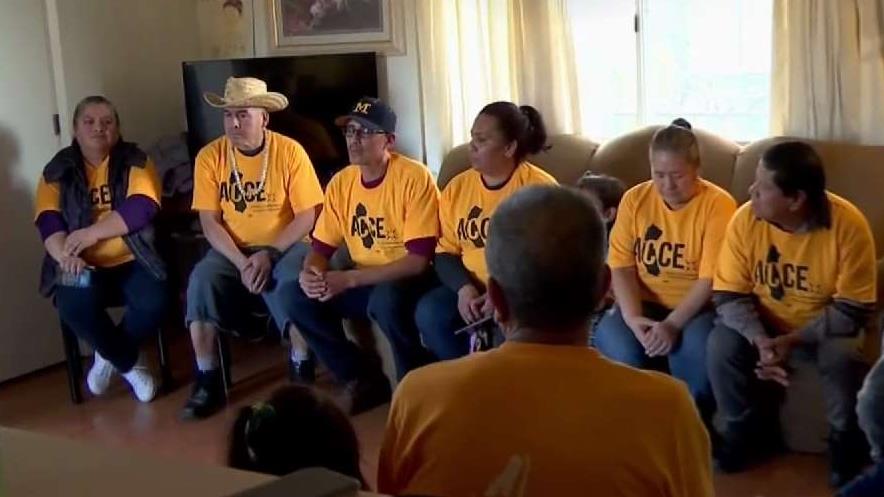 “To this point I’ve been able to pay, but next year I’ll be looking for somewhere under the bridge to move out,” he said. “Either I pay the rent, or I eat.”

Perez and his neighbors are fighting back. Seven of the building’s 14 tenants haven’t paid rent for four months. They are trying to buy the building with the help of the Alliance of Californians for Community Empowerment and the Oakland Community Land Trust. According to county records, it last sold for $717, 000.

The property owner’s son, who wanted to remain anonymous, said they’re surprised by the rent strike and don’t feel they’ve done anything to deserve it.  Adding they’re hoping for a swift and peaceful resolution and don’t plan on displacing anyone.

“Rent goes up and up,” said rent striker Jesus Alvarez. “We aren’t living in a palace.”

Alvarez lives in a one-bedroom apartment with his family of four.

Tenants said the place isn’t maintained the way it should be, with leaky sinks and collapsing kitchen cabinets. However, they want to stay and plan to strike as long as it takes to make a deal with the owner and keep from joining those forced to the streets.

“Next year like I said, I won’t be able to have a roof over my head,” said Perez.

No city in the Bay Area has seen the rapid remaking of neighborhoods quite like Oakland has. Construction cranes are often present, working on the latest sleek apartment building where studios might start at a little under $3,000.

Below those very apartments, the streets are lined with tents and RVs, the last resort for those who’ve been priced out.

Oakland Community Land Trust previously worked with city officials to buy a property from Wedgewood Inc. where a group of homeless mothers were evicted last month amid a public outcry. The women from the group Moms 4 Housing, who had been illegally occupying the vacant home since November, are planning to return to the building.

San Francisco and San Jose have had their own bouts with gentrification. Residents in San Francisco's Mission district have held multiple protests over condominium developments and tech company takeovers. And housing advocates in San Jose for the past 2-3 years have been protesting a massive Google development in the downtown area.