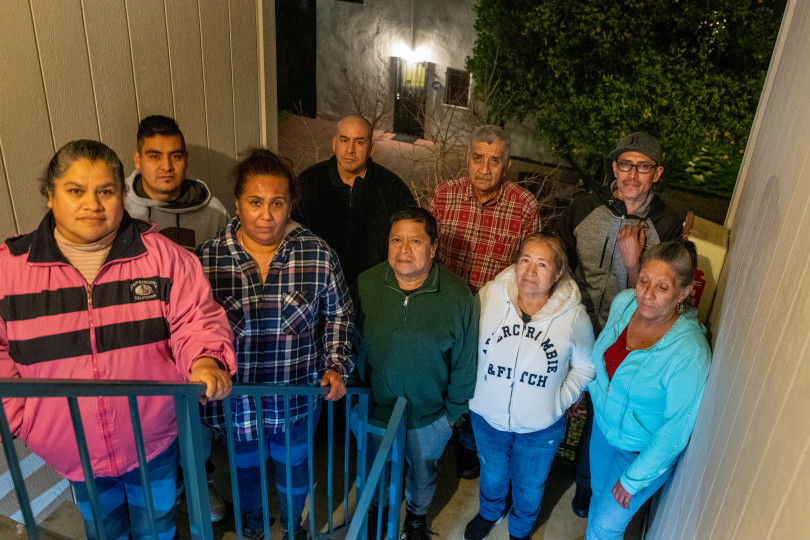 “We see it as a win,” said Israel Lepiz, housing organizer with the Alliance of Californians for Community Empowerment (ACCE). That’s the same organization that worked closely with Moms 4 Housing — a group of activists who recently took over an empty West Oakland house and succeeded in pressuring the owner to sell it to the land trust.

As prices continue to climb out of reach of many of the city’s longtime residents and wages don’t keep pace, a growing number of residents are getting fed up and refusing to pay rent, said Leah Simon-Weisberg, an attorney with ACCE. And such demonstrations can be powerful, she said, pointing out that it was rent strikes in Berkeley during the 1970s that eventually helped lead the city to adopt rent control.

“I think it’s growing,” Simon-Weisberg said of the rent strike movement, “and I think it will continue to grow unless we really change the relationship between investment and housing.”

The 29th Avenue building has been in a trust owned by trustees Calvin and Melinda Wong since April, according to the Alameda County Assessor’s Office. The Wongs could not be reached for comment. A voicemail left for the property manager was not immediately returned.

Though not involved in this case, San Francisco-based landlord attorney Daniel Bornstein has represented Bay Area property owners who have faced similar demands from activists to sell their buildings. To him, the strategy seems like something straight out of The Godfather films.

“To use the public flaying of someone to compel them to sell a property is, in my mind, ugly, unfortunate and only aggravates the polarization between community members,” Bornstein said. “We are looking at what looks like a shakedown.”

California law allows tenants to withhold rent if the landlord isn’t maintaining the property, Simon-Weisberg said. Many 29th Avenue tenants complain of everything from broken doors to cockroach infestations that they say the landlord has failed to rectify.

Most of the residents are native Spanish speakers working low-wage jobs, who have lived in the building for years. They’re all paying about $1,550 a month, up, for most of them, from about $750 when they moved in 10 or 15 years ago. As of December, one-bedroom apartments across Oakland were renting for a median price of about $2,500, according to Zillow.

The unrest in the building began in 2017, when 29-year-old Daniel Flores took the prior owner to court to fight a recent rent increase. He lost, with the court finding the increases were justified because the building is too new to be protected under rent control. After that defeat, Flores and some other residents, determined to keep fighting, got together and reached out to tenant rights groups for help.

The Oakland Community Land Trust, which buys buildings and converts them to permanently affordable housing, got involved about a year ago. After several months of negotiations — during which the landlord seemed interested in selling — the land trust scraped together a $3.2 million offer from various grants and investors, said Justin Tombolesi, who handles acquisitions and resident development for the nonprofit. If the deal had gone through, the tenants could have bought their units from the land trust at below market value — and never had to worry about another rent increase.

But the landlord rejected the offer.

ACCE and some of the tenants say they spent months trying to bring the landlord back to the negotiating table, with no luck. But after withholding their rent, they saw some progress last week when Calvin Wong agreed to a meeting. The meeting hasn’t yet been scheduled, and the tenants haven’t ended their strike. They might wait until they have more clarity from the landlord — such as an acknowledgment in writing of the Wongs’ intent to sell, Lepiz said.

Jesus Alvarez, a janitor who lives with his wife and two college-age daughters and is participating in the rent strike, said his family can afford the rent right now. But he’s worried about the next increase, and the one after that. That’s why he hopes the landlord will agree to sell.

“What will happen to me, to my family, next year?” he asked in Spanish. “We want a safe place for our families. That’s all.”