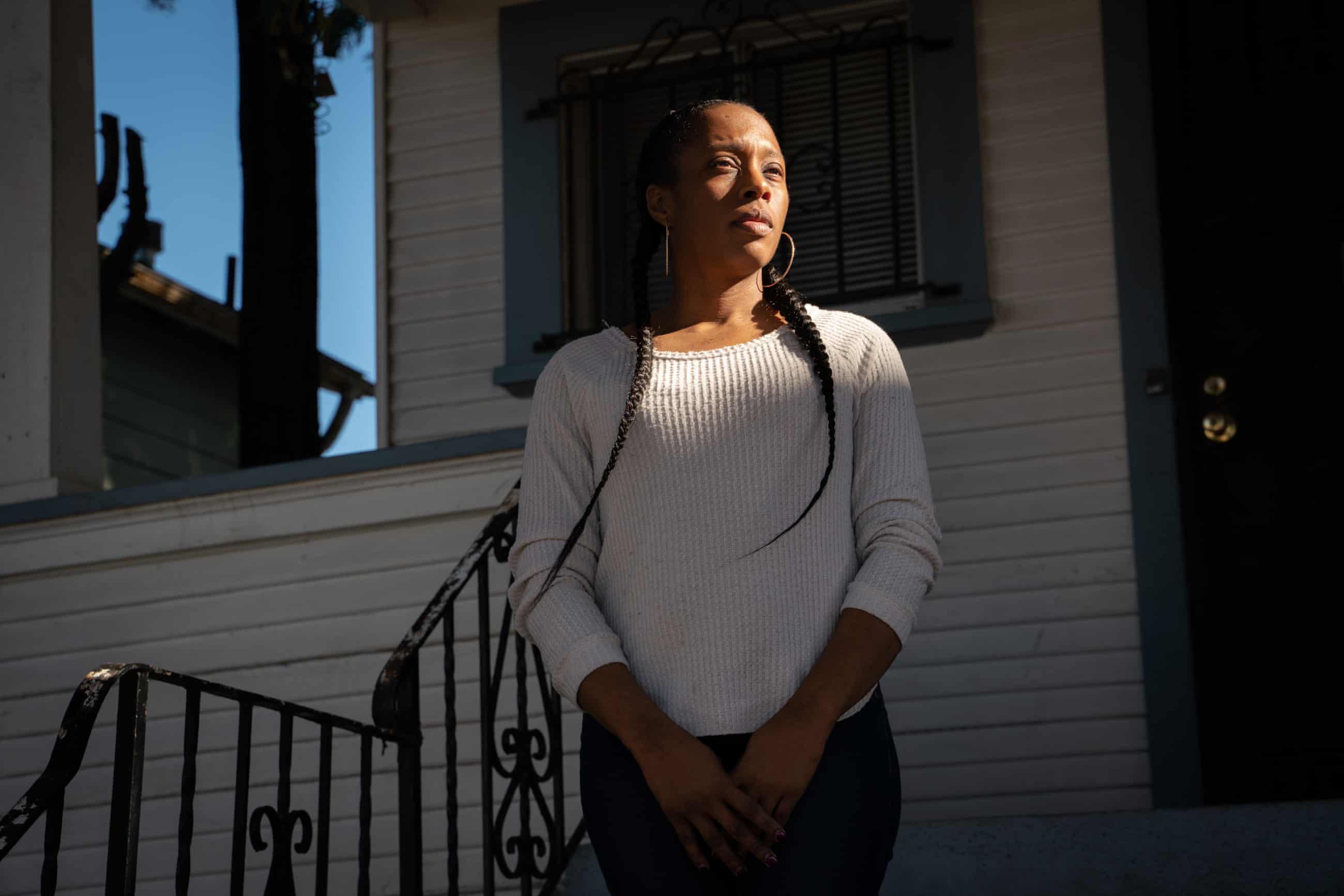 For almost two months, an unassuming white house on Magnolia Street in Oakland was home for Dominique Walker and her family.

They made it their home when they entered the vacant structure on 18 November with the intent to stay, knowing full well that they neither owned the house nor had an agreement to lease it. But a city grappling with a housing crisis that has priced out far too many cannot afford to allow houses like the one on Magnolia to sit vacant, Walker said. In Oakland, more than 15,500 units are vacant, according to the latest US census bureau data, while 4,071 people are homeless.

“This is bigger than me, than this one house,” Walker said. “I never thought I would be in this position. But this is the new face of homelessness. It doesn’t look like what people think homelessness would look like.”

In the early hours of Tuesday morning, sheriff deputies rolled up to the white house on Magnolia Street, where hundreds of Walker’s supporters had gathered, knowing that eviction was imminent. Two other homeless mothers staying in the house, as well as two supporters, were arrested. Walker planned to be there when the deputies arrived but was in an interview when they battered down the front door. She and other organizers had made sure beforehand that the children had somewhere else to stay during the chaos.

In the aftermath, Walker was teary and tired, but just as resolute as she has been throughout the process. Because when she and her family took possession of that house on Magnolia Street, they did so not just for themselves, not just for other homeless families like them, but to spark a movement – a movement that their supporters believe will be the next civil rights movement of our time: housing as a human right.

“I feel like I should be standing with my sisters,” she told reporters outside the house. “But I’m standing right here for them right now. This movement is just beginning.”

‘This is not the Oakland I grew up in’

Walker’s story has become far too common in the Bay Area. She has deep roots in Oakland, with her grandparents moving from Arkansas and Mississippi to make the city their home. After growing up there, she left for Tougaloo College in Mississippi in 2004, where she earned a degree in sociology and met the father of her children.

When their relationship fell apart, and she found herself having to flee domestic violence in April, she looked toward Oakland, toward home, only to find there was no one left.

Like so many others in the community, her family had been priced out, leaving for places like Vallejo, Sacramento, Antioch and Stockton. She got a job in Oakland organizing for the Alliance of Californians for Community Empowerment (ACCE), but no place to stay.

“I was sleeping at a family member’s house in Stockton, commuting from Stockton to Oakland every day, and bringing the kids to daycare in Berkeley,” she said. “We tried another family member in Antioch, and it didn’t make much of a difference. The commute was even worse.”

Walker tried some city programs that gave her vouchers for hotels and attempted to get into a rental assistance program that ended up having its funding cut. At the same time, she began to realize that the issue extended beyond her.

Everywhere she turned, she felt like she saw homeless encampment after homeless encampment. In the work she did with ACCE, people kept handing her forms with the address section left blank, sometimes crossing it out to write “homeless”.

“This is not the Oakland that I left, the Oakland that I grew up in,” she said. “I didn’t really understand the magnitude of what had happened since I left. My family would call and say, ‘I’m moving to Stockton,’ and I’d think, OK, it just got expensive. I didn’t realize we were in the streets with encampments like that until I came back.”

She joined up with other homeless mothers to form Moms 4 Housing. And then they started looking for a vacant house.

How speculators fuel the crisis

California has a widespread vacant property problem. About 8% of all housing units in the state remain vacant, an estimated 1.2m, according to the US Census Bureau – though some of those units may be short-term rentals or market-rate apartments with no tenants.

Some blame the vacancy problem in part on Proposition 13, a 1978 ballot initiative that capped property taxes at 1% of the home’s value at the time of purchase, and reduced total property taxes by 57%. With such low property taxes, it’s cheaper for some longtime owners and investors to let a property remain vacant while waiting for the market to come out in their favor.

And following the foreclosure crisis, in which Oakland was struck particularly hard, more than 10,000 homes changed ownership in the city, many in low-income neighborhoods, according to an Urban Strategies Council study. Of those completed foreclosures, 42% fell into the possession not of individual property owners, but of investors.

The house on Magnolia Street had sat vacant for more than two years, becoming an eyesore on the block, according to Moms 4 Housing. Wedgewood Properties, a Redondo Beach (Los Angeles county) real estate investment company, purchased it in July at a foreclosure auction for $501,078. The company specializes in house-flipping – buying oftentimes foreclosed-upon houses cheaply, renovating them and then putting them back on the market for profit. “Speculators” is the term that Moms 4 Housing uses – under the hashtag “evict the speculators”.

“We have a housing crisis that is being driven by speculators,” Leah Simon-Weisberg, an ACCE attorney who represented Moms 4 Housing in court, told the Guardian. “It’s created a fake market where people who have cash buy properties and then middle-class people can’t buy them. They’re cheating essentially because they’re not buying for housing, they’re buying to sell. Then all these government programs can’t work. People can’t use FHA [Federal Housing Administration] loans because you’re always competing with people who will pay cash.”

“They were a key player in the foreclosure crisis. We saw them over and over again harassing tenants, evicting tenants and doing it so they could make greater and greater profit,” said Aimee Ingliss, the power-building program director of Tenants Together. “I personally found it ironic seeing a serial evictor like Wedgewood turn around and say to Moms 4 Housing, ‘Hey, you’re taking our property,’ when they were a key player in taking the property of black and brown people in Oakland and in other places.”

Wedgewood has maintained that while it was sympathetic to the mothers’ plight, the house belongs to the company and this was “a straightforward situation of illegal break-in and illegal occupation”, said a company spokesman, Sam Singer.

He disagreed with the assertions that Wedgewood played a role in the current housing crisis.

“It’s a company that comes when other people have been foreclosed upon,” he said. “Wedgewood has nothing to do with the financial issues of the people whose homes they purchase. They show up like any other individual or company at a public auction and they put a bid on a property. Then through their investment and through their knowledge, they improve the neighborhood.

“The reality is they’re a housing creator,” Singer continued. “These are homes that were previously occupied by people who could not make their payments. These were homes that were in bad states. Wedgewood rehabilitates them and puts them back on the market.”

But back on the market for whom, is the question. Throughout the neighborhood surrounding Magnolia Street, a smattering of houses stand out amid the Edwardians and craftsmans, not because of blight and disregard, but because of their overtly modern style. Local residents throughout the Bay Area have become familiar with this sight: homes renovated out of place with the rest of their neighborhoods, with towering “gentri-fences”, the calling card of speculation.

‘Shelter is a human right’

Walker chuckled when asked about a neighboring house – the one with “the tall security gate”. “It’s ridiculous,” she said. “It’s like they don’t want to be a part of the community, but they want to be here.”

The housing crisis has robbed her of more than just shelter for her family.

“Everything has changed,” Walker said. “I don’t know anybody on the street that I grew up on. There’s just no sense of community. All of the friends I went to high school with, they’re everywhere but nobody is here. The gentrification that happened, not only are the people coming into our community, they’re also trying to change the culture. They’re calling the police on churches, on drummers, and this is a part of the community. It’s just not the same.”

This is the movement, what Walker and Moms 4 Housing are fighting for. In Oakland, 78% of the homeless population reported that their last place of residence before becoming homeless was within county limits. Seventy per cent were black.

“This is about people working, sometimes more than one job, and not being able to get into housing,” Simon-Weisberg said. “Or once they lose their rent-controlled housing, they just can’t get back in. And they get to this place because we have an unregulated housing market that is being manipulated by speculators. It’s like when you have a war going on and you have war speculators and you have people charging 10 times for meat. You don’t get to profit because there’s a war going on.”

Walker has been called a squatter, a thief, a criminal. She knows she broke the law in taking possession of the house on Magnolia Street. But they broke the law during the civil rights movement too.

“It doesn’t bother me when people say: ‘Oh, it’s criminal,’ because I know what the true crime is,” Walker said. “The true crime lies in this society that we live in that can normalize people living in the street. Shelter is a human right. It’s needed to protect yourself from the elements, and it shouldn’t be commodified.”

After a judge ruled in favor of Wedgewood last Friday, Walker held court on the steps of the house, speaking to the media. “We are the blueprint for this movement and we are not going to stop fighting,” she said.

When a reporter asked if Moms 4 Housing was considering taking over other houses, she coolly responded: “I would encourage folks to do whatever they need to provide shelter for their family.”

On the first day at the house, even though it required serious deep cleaning and a power-wash on the outside, Aja, Walker’s five-year-old daughter, couldn’t help but run around, excitedly exclaiming, “This is my house, this is my home,” Walker said. Aja had plans to paint the outside gold, “with glitter”, but the inside orange – “Mommy’s favorite color”, she said.

Just days before the sheriff’s deputies came, Aja jumped about, playing with Amir in the living room where Walker asked guests to take their shoes off because Amir still crawled at times. “It means a lot to the children, to have a house, to have a space to call their own,” Walker said.